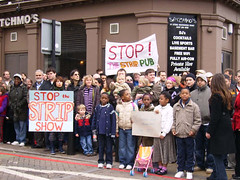 Those in the Stoke Newington/Dalston area may be interested to know about a fledgling campaign to stop Satchmo’s – a bar I used to be really fond of – from getting a license to become a “sex encounters establishment”.

Former F-Word guest blogger, Kate Smurthwaite, (aka Cruella of Cruella-blog) has been spearheading a campaign to stop Satchmo’s on Stoke Newington High Street from being granted the license. You can read more about the campaign and see newspaper coverage of their protest last weekend at the specially set up Stop the Strip Pub blog.

Manager Scott Davis is quoted in the Evening Standard as saying

“We’re trying to reinvent ourselves as a modern, stylish, cocktail bar that offers adult entertainment and live music”.

Note the relative priorities there. Also

“we believe it’ll be positive for the area”.

Really, Scott? Do you? There was me thinking you were simply trying to rake in the cash in a pub which has been pretty much empty every time I’ve been in it. I had no *idea* that this was a community-spirited venture. How *appropriate* for a pub in a residential area, next door to a mosque and community centre. How *helpful* that you’ve been able to put your finger on just exactly what the local community has been crying out for.

So tell us, Scott, how this strip pub of yours is going to be positive for the local area? Will it be through the increased noise and late night disturbance of hoardes of drunk, sexed-up men falling out at closing time? Will it be through the almost inevitable increase in street harassment of female residents in the area? The increase in street prostitution which may occur around the venue? The possibility of prostitution and rape of the women dancing there? The increased likelihood of being raped as a passer by? All potential results of lapdancing clubs identified by Eaves. Goodness me, Scott, it’s a good job you came along with your ideas of how our community could be made better.

I’ll be writing my letter to the licensing authorities this afternoon and doing all I can to support the campaign. I hope some F-Worders will too. They need to be with the council by 25th of March – full details and suggested content are over at Stop the Strip Pub.

Image from Stop The Strip Pub