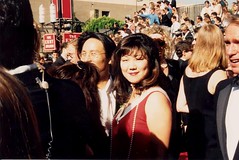 I have posted about Margaret Cho 15 times since the launch of this blog. Frankly, I’m surprised it’s not more. As far as I am concerned, the woman can do no wrong.

So it is with excitement that I pass on the news that she is going to be back on TV with a reality show about her life (via Feministing).

This is not the first time Cho has had her own show – she documents the catastrophe of her first show, All American Girl in her work. Ostensibly about her life, the programme was stifled by TV executives, and their concerns about her weight sparked an eating disorder. More here and here and, most importantly, in this brilliant book.

But something tells me this time will be different:

Margaret burst onto the scene in 1994 with her sitcom “All American Girl” and her struggles with the network over that show are legendary. After the show was canceled, Margaret channeled all of that negative energy from her network experience into a wealth of comedy material that fueled her rise as one of the hottest comics in the business.

This VH1 series will follow the irrepressible Margaret Cho and her eccentric entourage as she fights to be herself in an industry that in the past wanted her to be something other than herself. The series will touch upon all aspects of Margaret’s “anything goes” lifestyle, from the strained and awkward moments provided by her somewhat traditional Korean parents to the more irreverent and outrageous moments shared with her colorful cast of friends and colleagues.

Photo by Alan Light, shared under a Creative Commons license