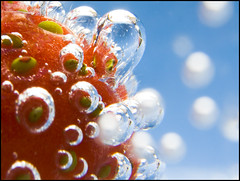 An Idaho strawberry farmer has legally changed his name to Pro-Life, in the lead up to standing for election as senator.

He previously ran for governor as Marvin Pro-Life Richardson, but his middle name was removed from the ballot because of rules on sloganeering. But CBS News reports:

Now, though, officials in the Idaho secretary of state’s office say they have no choice because Pro-Life is his full and only name. He says he will run for the highest state office on the ballot every two years for the rest of his life, advocating murder charges for doctors who perform abortions and for women who obtain the procedure.

Organic strawberry farming doesn’t seems like a profession that would attract such… lovely… individuals.

The move hasn’t been greeted enthusiastically by Pro-Life’s fellow pro-lifers, including David Ripley, executive director of Idaho Chooses Life, who “fears some voters may think Pro-Life is a position rather than a candidate and mistakenly mark their ballots both for him and for another anti-abortion candidate for the Senate, thus nullifying their choices”.

(Via Alice at Big Queer Blog)

Photo by MarkyBon, shared under a Creative Commons license