What are you doing for International Women’s Day? 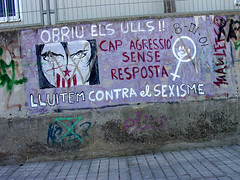 Like you need telling, but tomorrow is International Women’s Day. What began in 1908 with a 15,000 woman strong march through New York City to demand better pay, shorter hours and the vote, now involves thousands of events across the globe.

You can check out the official IWD website for info on what is going on in your own area, but if you’re in London you’ll be spoilt for choice.

Many of us at The F Word will be out on the streets for the Million Women Rise march, starting in Hyde Park at 12pm. Also check out the march’s list of demands to end violence against women.

But there’s also Capital Woman 2008. Angela Davis will be speaking, but there’s a whole range of workshops and speeches and presentations.

And those are just the big ones in London. Check out this listings for similar events up and down the country.

Look, we never run out of bad news stories to report. It’s enough to get anyone down. I don’t just see these events as an opportunity to protest, but as an opportunity to get out there and do something positive. You don’t have to do anything too political if you don’t want – but even if you just want to go see a movie, you can be supporting IWD and women film-makers. See, it’s easy.

Photo by airefresco, shared under a Creative Commons license