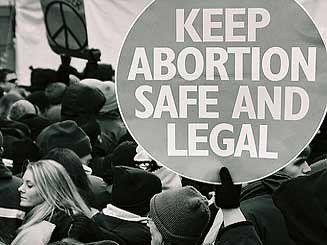 Abortion Rights are urging all pro-choice supporters to write to their MPs quick smart urging them to protect the abortion time limit. Anti-choice MPs aim to use the Human Fertilisation and Embrylology bill to reduce the time limit from 20 to 24 weeks, and we know they won’t stop there. Ann Widdecombe and David Cameron are both supporters of a reduction, so if you’re as lucky as I am and have blue representation, there’s extra impetus to get scribbling.

You can find a model letter here, but it makes no demand to improve abortion provision, so I wrote my own, suggesting the removal of the two doctor rule, provision for nurses and midwives to carry out early abortions, improved sex education and better financial support for single mothers. Address letters to your MP at House of Commons, London, SW1A 0AA.

There will be a national lobby of parliament on Wednesday May 7th from 3pm to 6pm, followed by a public meeting at 7pm, venue TBC.

Image by openDemocracy, shared under a Creative Commons license.