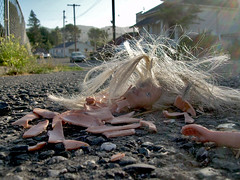 In response to criticisms about use of skinny models, fashion mags are now using the power of Photoshop to make women look more “naturally” healthy, according to The Telegraph.

Both Shakesville and Feministing have skewered exactly why this is just as bad as airbrushing women to look vanishingly small. As Melissa says:

Head over to either blog to see an example, in which Cameron Diaz is given slightly bigger thighs, slightly bigger shoulders and arms, her breasts made more “level”(?!), her hips and stomach made less muscly and, the finishing touch, reported without apparent irony:

In other news, if you’re the driving sort (although it is Earth Day!), you might want to avoid Honda, and opt for a VW instead. Do you remember the story about the US woman who had “fag” scrawled on her car, and decided that instead of cleaning it off, she would drive across country to educate people on homophobia? Feministing reports that VW has paid for her “fag bug” to be done out in lovely rainbow stripes, to aid in her mission.

Photo by eyesontheroad, shared under a Creative Commons license