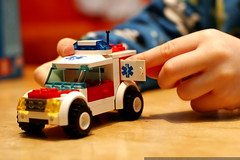 A doctor writing in the British Medical Journal has argued that it is bad news that women outnumber men in medical school – because more women want to work part time, leading to “staffing problems”, reports the BBC.

Women, who now outnumber men in medical schools, were also less likely to take part in training or research, he said.

But opponents said the best candidates should be chosen regardless of gender and flexible working policies improved.

Professor Jane Dacre, vice dean of biomedical sciences at University College London, said rather than worrying about having too many female doctors, there should be more focus on ensuring equal opportunities for medics throughout their careers.

So, presented with the issue that female doctors that have children are lumbered with an unequal burden of childcare responsibilities compared to male doctors (as replicated throughout society), the answer of this GP is not “let’s make things a bit fairer then, shall we”, it’s “let’s have more male doctors”!)

Although, to give him his due, McKinstry does say that this reverses years of men dominating the profession and it would be nice to change the pressures on women to undertake the burden of care, this is a bit rich.

Photo by sean dreilinger, shared under a Creative Commons license