What can you do if your crush is sexist and homophobic? How can you channel righteous feminist anger into something positive? In our second installment of the new ‘Ask a Feminist’ feature, we field these questions and more 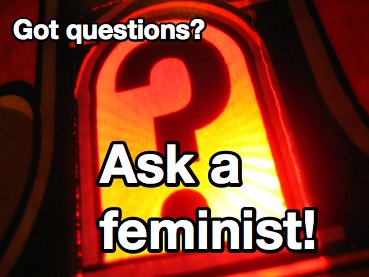 Answers will be written by regular F Word contributors, and represent only their own potentially fallible opinions. In the spirit of pluralism, we will try and work in more than one response if we can. There is no definitive ‘F Word line’ or ‘feminist line’, and our answers are given in that spirit.

There is a boy who I’m interested in, he’s charming, funny and highly intelligent and considerably nicer than people who I’ve been involved with in previous relationships. However, the problem is the less desirable aspects of his personality; for all his intelligence, wit and charm, he is also fairly sexist and homophobic, although I wouldn’t consider him a misogynist. He watches and is an open advocate of porn, is a self confessed homophobe – in spite of his gay brother and bisexual friends – and, whilst in the past I have been open in my criticisms of this and open about my feminism, I have received heavy criticism of feminist attitudes and my opinions in return.

I have found myself trying to down-play my feminism in his presence, much to the disgust of my close friend, also a self proclaimed feminist. However, despite the fact that I am fully aware of my hypocrisy, I am concerned that for him to ever reciprocate my feelings I will have to compromise myself, something I am not especially willing to do. Equally however, nobody is perfect and I am wondering whether I am simply highlighting his flaws especially because they clash so radically with my personal beliefs. Whilst I understand this is probably an email of considerably little importance or significance in comparison to many of the others you receive, I would greatly appreciate an outsiders perspective, especially one of someone who understands feminism!

Thank you for taking the time to read this.