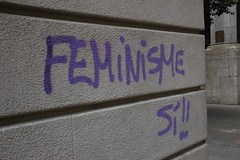 Spain has a female-majority Cabinet for the first time ever, reports The Guardian.

Jealous yet? Given the current situation, and the poor state of women’s representation in Parliament more generally, it is difficult to imagine women outnumbering men in the UK Cabinet any time soon.

The Independent reports that not everyone has been able to swallow this move without resorting to sexist outbursts, including “a conservative commentator who referred contemptuously in yesterday’s ABC newspaper to ‘ZP’s battalion of inexperienced seamstresses’.”

Incidentally, note the irritating lede given to the Guardian story:

He has always been something of a ladies’ man. But now Spain’s prime minister, José Luis Rodríguez Zapatero, has proved his feminist credentials by naming more women than men to his new cabinet.

Ugh. Zapatero, who happily calls himself a feminist, has passed sweeping gender-equality legislation:

Under the new legislation, companies with more than 250 employees will have to negotiate plans to achieve gender equality, for example, by setting a goal for the company boards to be made up of at least 40 percent women within eight years.

The law also provides 13 days of paternity leave for new fathers, which will gradually be expanded to four months by 2013. There will also be special social security benefits for mothers under the age of 21.

He has also toughened up the law on domestic violence and legalised gay marriage. The majority-female cabinet is a direct result of his pro-women, pro-feminist policies, not because he is a “ladies’ man”. What an offensive suggestion.

Photo by doviende, shared under a Creative Commons license