‘Is she on a jihad mission?’ 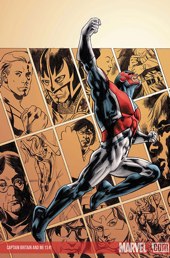 The above question was asked by a Newsarama reporter interviewing Paul Cornell – a writer for Marvel comic books – about a new British Asian character in the superhero title Captain Britain and MI:13. See a screen-capture of the full exchange here.

Although it is unbelievable that the clearly racist, Islamophobic question was asked in the first place, even worse, it was published on the Newsarama website. It’s not like they didn’t know it was offensive – because Cornell called them up on it (specifically saying “You *what*?! I typed something much ruder in answer to that originally. What the hell?”). But publish they did, causing many users of the Newsarama forum and comics blogosphere to call them up on it, yet again.

The response? Apologise? Oh no – Newsarama went for the cover-up, deleting the paragraph in question from the interview they ran online, the forum posts discussing it, and redacting it from the print version.