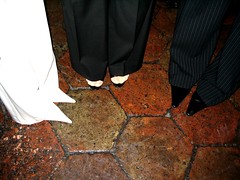 Fellow Jewish* women reading this will be interested to note that a male rabbi has decided we are not meant to wear trousers – even when we’re all alone in the dark. I am not kidding.

I learned of Rabbi Shlomi Avineria’s opinions on trousers via Rebecca at Jewess, who points out that this same bloke thinks that women shouldn’t enlist in the army. Well, I think there are some serious reasons against anyone signing up for the Israeli army given the current situation with Israel/Palestine, but this is not one of them: “We need you to function as a pure and clean woman… and not to undermine your mental foundation… remember: Army service for women, in any shape or form – is forbidden! Forbidden! Resist the temptation!”

Note: Avineria is rabbi for Beit El, a Jewish settlement in the West Bank built on privately-owned Palestinian land.

(On Flickr I found this photo as well, of the first woman in Israel to object to doing compulsory military service on specifically feminist grounds.)

Anyway, back to this rabbi’s views on trousers:

“in general, a woman must always wear modest clothes even when she is alone and in the dark, because the Holy one blessed be he is everywhere. And yes, trousers are a self-prohibition even when a woman is alone.”

(*In my case, it must be said, non-practicing).

Photo of sinful trews by Sim Dawdler, shared under a Creative Commons license