New feature: A slice-by-slice attack on women’s right to choose

The campaign to ban women from terminating pregnancies after 20 weeks is only the beginning, says Kit Roskelly 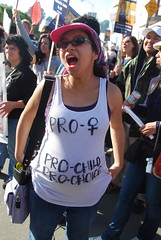