Perhaps not the most direct or effective method but the British government has launched it’s new campaign to inform men using women engaged in prostitution that they may be breaking the law. 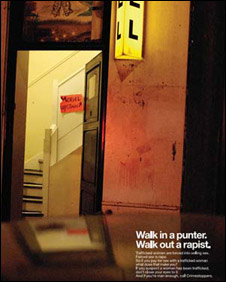 So there we have it.

The poster, which will be placed in gents’ toilets in pubs and clubs, will be supported by an online advertising campaign. It shows a brothel entrance with the caption: “Walk in a punter. Walk out a rapist.” It also urges men who discover a woman they believe may have been trafficked: “If you’re man enough, call Crimestoppers.”

Seems they might have forgotten this research which found men often were aware women were not fully consenting or had been trafficked and still proceeded to have sex (i.e. rape) them.