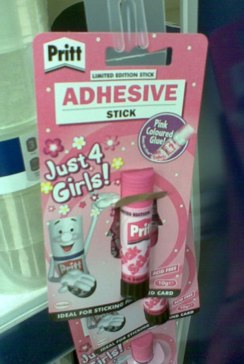 This pink Pritt Stick “4 girls” was spotted in Tesco by a member of our Facebook group.

As a primary school teacher, don’t even get me started on the incorrect use of ‘4’, let alone the gendered message this product would send to my 8 year old pupils.