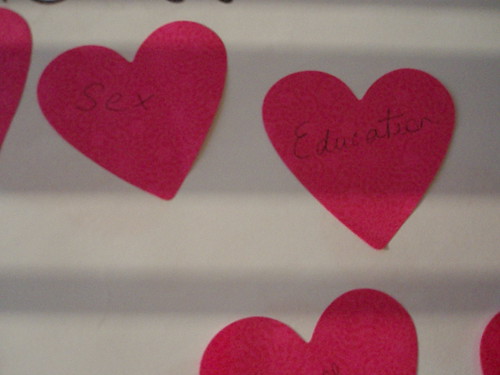 The NSPCC, and I’m sure not going to make myself popular arguing with a group as respected as them, are saying that schools should teach more about relationships in sex education. This comes in response to data from Childline suggesting 50 children a day ring up saying they feel pressured to have sex. And in that light the NSPCC suggestion sounds wildly sane but I have to admit it actually made me flinch a little.

At the moment schools are only obliged to teach the facts of human reproduction. The first thing that frightens me is that if the syllabus is expanded out to include relationships, what is the risk that the facts of biology will be lost? I think children have a right to understand how their bodies work in factual scientific terms. Many especially faith schools are reluctant to teach these facts and given the chance to hide them discreetly behind a barrage of warnings about the unholy nature of any kind of relationship not fully approved by religious leaders, the message could be watered down beyond recognition.

And finally who exactly is going to set the relationship agenda? I’m sure religious leaders would love to. And so would some of the virginity cults that we seem to be importing from the US at the moment. The uproar from religious parents if their children were taught that anything other than chastity and fidelity was acceptable and enjoyable means that the education is always going to be skewed. Who is going to let kids know that promiscuity, safely practiced, can be a lot of fun? And we all know the fuss that ensues if you teach children that it’s ok to be gay.

All that said, I’m not totally against raising in school the subject of dealing with pressure to have sex. I think children should be taught that they have human rights, and that one of those is the right to make their own decisions about sex (or this could be covered under the women’s studies addition to the national curriculum that I’ve been talking about forever). But I’d like to see that taught separately from the biological facts of sex.

Photo by Reading is Fun, shared under a creative commons license.