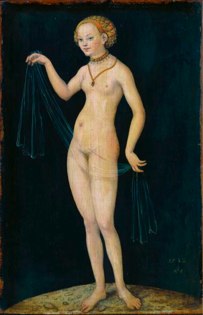 As soon as I had heard that a poster of Lucas Cranach the Elder’s ‘Venus’ was initially banned from display in the London Underground, I knew I had to go see the exhibition that is causing such a stir.

My original perception of Cranach was of a German artist working in the Northern Renaissance period. More crucially, I knew of him as the close companion of Martin Luther and a participant in the religious Reformation taking place at the time, and so to hear of a risqué portrayal of Venus by the artist surprised me.

Many have speculated over the reasons for the ban, suggesting it may be because the figure resembles a young girl rather than a woman, or that certain religious groups have asked for it to be banned, or it may just be because the painting is a depiction of an overtly sexualised, full-frontal female nude. Whatever the reasons, I was intrigued and so I visited the exhibition with many expectations and burning questions.