The Angry Black Woman has another perspective on Barack Obama’s infamous “sweetie” remark.

Pink News reports that the Foreign Office has told its embassies to do more to promote LGBT rights. Meanwhile, pass the roti on the left-hand side has news on efforts to decriminalise homosexuality in India.

Karen Bass has become the first black woman to lead a state legislative body in the US, more at What About Our Daughters.

Figleaf points to a story about an elite high-school where students ran a sexist and racist Facebook group mocking teachers. They were caught – but the teachers subjected to this abuse had their contracts put under review.

Stroppyblog passes on a bit of good news – 19-year-old gay Iranian teenage Mehdi Kazemi has been granted asylum by the Home Office. Now, if only it didn’t seem to take a massive publicity campaign every time…

On a similar subject, Fighting Monsters considers the debate on the appropriate term for people seeking sanctuary from oppression in another country – asylum seekers or sanctuary seekers? Does renaming do any good?

Anji at Shut Up, Sit Down has collected together links to some of the blog responses to the news on abortion and IVF.

And, finally, via Wonderland and with permission from the photographer -Allouette, a photo of Amish girls on one of those simulation bike racing games: 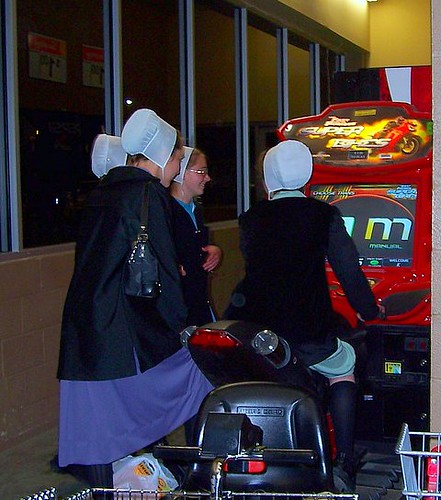