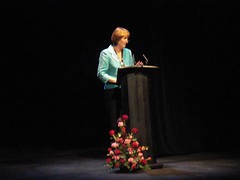 Government should not be in the business of promoting marriage, or particular types of family, Harriet Harman has very sensibly said in a report by the think-tank Civitas.

Of course, the right wing press are busy spinning this as a shocking story of politicians without ‘morals’, but, well, they would. Perhaps they’re feeling a bit… defensive?

Actually, though, Harman’s views were in an interesting-sounding report, which comes to some different conclusions. Very interesting stuff:

Both the Conservatives and Labour assume that those people not living in married two-parent families are simply choosing not to. The Conservative Party therefore believes that the two-parent family needs promoting by financial incentives to marry, while Labour, has adopted a ‘neutral’ position in which family structure doesn’t matter. Both parties are out of touch with reality.

Civitas also did a survey of 20-35-year-olds, which found that lots of people are still quite keen on getting married, but, unsurprisingly, only 2% want to for tax reasons.

Anastasia de Waal argues that while Labour thinks it is being liberal, its position on the family is actually highly conservative.

Its policy is currently determined not by its own priorities, but by Conservative policy and past notions of the repressive ‘traditional’ family. Labour therefore considers family structure to be solely Conservative moralising territory and marriage irrelevant to 21st century policymaking.

There is currently a very narrow-conservative-conceptualisation by Labour as to what is meant by attaching importance to family structure and the two-parent family. Structure ought to refer as much to the parenting model as to the relationship between parents.

This is an interesting point of view. However, I generally agree with Harman – I don’t think that government should be in the business of interferring in relationships. De Waal argues – quite rightly – that government should be dealing with structural poverty and inequality, because one of the consequences of this inequality is it prevents people from making the relationship choices they want to. I have to say that, to me, dealing with structural inequality is an aim in and of itself – one which you’d assume Labour is already basically signed up to.

The actual policy recommendations in this report, I can get behind, however. For example:

The current emphasis on women in every area of policy affecting the family should be reformed in favour of equal responsibility. Family policy must include men, starting from childcare to the position that even if the relationship between adults ends, the responsibilities towards children don’t.

However, as pointed out yesterday, I do think it’s actually crucial to frame policy on the basis of parenting not gendered terms of ‘mothering’ and ‘fathering’. So, yes, equal responsibility when fathers are in the picture is crucial – but it is very important not to marginalise families which don’t include them, whether out of choice or necessity – a point which (from the press release, anyway), I don’t think the Civitas report really does justice to. Indeed, it is a bit dismissive of Labour’s position on not wanting to be judgemental of single-parent families.