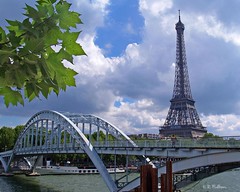 A speech writer for Bernard Kouchner (France’s Foreign Minister) has written a book advising on the best places in Paris to look at beautiful women. According to Pierre Louis Colin, people go to Paris to see the city’s magnificent women as much as they go there “to admire the Mona Lisa and the Eiffel Tower” and he wrote The Pretty Women of Paris because he couldn’t find any such guide already in existence. The French feminist group SOS Femmes has taken a critical view of Colin’s book and this has, somewhat predictably, been sensationally described in the press as “feminist fury”.

Though arguably not quite worthy of my “fury,” I discussed this thinly veiled effort to keep the sexes in their traditional places on the Richard Bacon show on Tuesday (scroll through to about an hour and a half in). Colin has said he is “blowing a raspberry” at so-called “political correctness” and this obviously makes the book sound edgy but there isn’t anything very rebellious going on as far as I can see. If anything, he just seems to be blowing a raspberry at women in celebration of the fact that we get looked at more than men do.

Judging by what Pierre Louis Colin said during our discussion and the quotes I’ve read, I’d say this “guide” is basically one man’s quaint, misty-eyed fantasy of a culture where men who fancy women stride about, all-seeing and all-knowing, while we lovely ladies feel special because -oh joy!- these lofty adventurers might have something flattering to say about us. Here’s a prime quote:

In this troubled century, while from America come the echoes of another moral order, the responsibility of the contemplator is immense: in his respectful courtesy depends a part of the survival of our civilisation of liberty, of gentleness, and of grace.

Surprise! The contemplator is framed as male. If you were in any doubt with regard to the unequal conditions that underpin this assumption, here’s a Daily Mail comment to contemplate:

Now that’s my kind of elected official. The kind of guy you can sit down and have a beer (or a glass of wine) with and shoot the breeze about sports and women.

Doesn’t this commenter realise that smugness is deeply unattractive? Okay, I admit I’m being obtuse now…

That said, I’ll admit that I have been known to “shoot the breeze” about men. I’ve also done a fair bit of roaming about, quietly observing and contemplating them. Of course, all that hanging out alone in public spaces sometimes leads to me being interrupted by some random guy who has decided to loudly make it clear that he is going to contemplate me but, hey, what the hell. As we are constantly told -in no uncertain terms- equality has been achieved! If I get frustrated, I can always pop to my local newsagent to grab one of the many magazines showcasing sexy men with full boners, getting thoroughly rogered by anonymous women for my pleasure…

All that talk of the freedom to “contemplate,” along with the author saying he is on a “high mission,” seems to allude to the intellectual. Perhaps such high-mindedness is beyond me because I have to admit I’m having trouble appreciating the great philosophical high ground to be gained from making a special trip to the Spiral staircase at Cafe Louis Philippe to look up women’s skirts (one of Pierre louis Colin’s recommendations in the book). Perhaps I would understand if some randy lover of men informed me of the cunning ways that I could invade men’s privacy by sneaking a look at their cocks without their permission. Perhaps a tour of the urinals is in order? I wonder what the Daily Mail would have to say about that? (They don’t seem to have much faith in men so I’m guessing the words Asking, For and It would figure somewhere.)

In all seriousness, I don’t really think there is anything wrong with anyone admiring another person’s beauty. Being a sex object from time to time is fine if it doesn’t drown out everything else or become unmanageably one-sided. As I’ve said before, I also happen to think men miss out when society doesn’t fully appreciate the beauty of their bodies.

Hopefully, for the women of Paris, this book will prove to be a passing novelty item. If it doesn’t, they can probably expect some very annoying tourists.

Photo by KRFulton, shared under a Creative Commons Licence.