Obama is a radical feminist (according to men’s rights activists, anyway…) 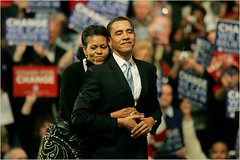 The US election process is continuing on its long and merry way, and I have thus far resisted the urge to go into all the endless back and forth over the fortunes of each candidate. However, I couldn’t let pass this piece over at Men’s Daily News, with the headline “Obama Hitches his Wagon to the Radical Feminist Agenda”.

A number of points: Men’s Daily News frames this as a bad thing. And they have a shaky grasp on what constitutes radical feminism (that’s putting it too kindly – in fact they aggressively reframe liberal feminist concerns and organisations such as NOW as ‘radical’ because they have their own anti-woman agenda, but hey!)

So, back to MDN. If anyone could ferret out a pro-woman policy/agenda, then surely it is a bunch of men’s rights activists looking for something to object to!

As you can see, Sen. Obama is marching lock-step with the radical feminist agenda, pretty much from A to Z:

Note: unfortunately they don’t manage to come up with 26 seperate instances of “radical feminism”, but we’ll take what we can get.

Child Support: Obama wants to spend $4.9 billion over 10 years to throw more low-income dads in jail. That will force more single moms onto the welfare rolls. Makes a lot of sense, doesn’t it?

Remove the piffle from men who are offended that they are expected to provide financial support their own families, and that sounds quite good. $4.9 billion! Excellent!

Contraception: Obama wants to expand teenager’s access to contraception. Remember last month’s comment that he didn’t want his daughters to be “punished” with a baby?

Domestic Violence: The democratic candidate believes that women are never violent towards their husbands. (I guess Hillary laying tracks on Bill’s face and singer Amy Winehouse beating up her hubbie don’t count.)

I am going to assume this is a response to Obama actually saying something that acknowledged male violence against women.

Gender Wage Gap: Barack insists discrimination is the reason why women chose to work fewer hours than men, and that needs to be fixed with stronger enforcement of the Equal Pay Act.

Something that only bitter misogynists who think women should be paid less for the same work could object to.

Math and Science: Women hold only 12% of science and engineering jobs in business and industry. More proof of the patriarchy keeping women down.

Again, shame there’s no more details on what Obama would do about this, but he’s paying attention…

Great – Title IX, UK readers, is a wonderful provision which means that US schools and universities must commit funds to sport for girls and women. We could do with one of those.

Women-Owned Businesses: Female-owned businesses are more likely to have their loan applications denied. Didn’t I tell you discrimination lurks everywhere?

Is he going to do something about it? Not clear, but again, a sign that Obama is identifying gendered problems.

Women’s Health: Obama wants to fund the separate-and-unequal “Centers of Excellence in Women’s Health” that turn away uninsured men with serious medical problems.

Wow, those men’s rights activists really are off the rail. But, again, great stuff.

And then there’s the matter of Michelle Obama. An intelligent and charming woman, I’m certain. But is she First Lady material? I have my doubts.

At a New York fundraiser, she tweaked the Illinois senator for not “putting his socks actually in the dirty clothes” – a necessary qualification, we know, for every man who one day hopes to become president.

Because a first lady should be subserviant to her husband at all times; cracking jokes about him displays an improper lack of respect. Jesus.

The finishing touch to a thoroughly offensive story?

Barack Obama, the latest hen-pecked Democratic candidate who has pretensions of becoming the next Leader of the Free World.

Note: for a more serious commentary on what’s going on stateside, you may want to check out the tooing and froing over at Comment is Free, with Alice Walker arguing why Obama represents the radical change the US needs, then Bonnie Greer giving her response.

Photo by baratunde, shared under a Creative Commons license