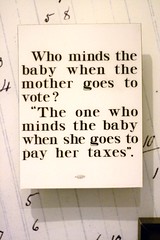 Local elections have arrived! 2008 marks the 90th and 80th anniversaries of the two franchise acts that gave women the right to vote in Britain – a right that some women sacrificed their lives for and many women still don’t have access to. Don’t forget to take the opportunity to pull the levers of power today if you’re eligible.

If you’re in London and still making your decisions, Fawcett has video interviewed the leading Mayoral candidates about how they would promote women’s equality and respond to the needs of ethnic minority women in the capital if elected. The videos mark the launch of Fawcett’s new femocracy campaign on ethnic minority women and politics which aims to empower black women to make change in formal decision-making processes, including by voting.

If you’re not registered to vote, I’d be really interested in hearing about why not in the comments…

Update: There’s also an interview on Fawcett’s site with Merlene Emerson on her experiences as an ethnic minority woman candidate in the Assembly elections and why she thinks political power is not in the hands of black women.

Photo by ianturton, shared under a Creative Commons license