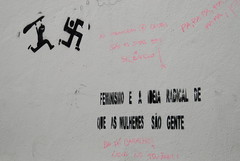 The Washington Post ran a really infuriating article by Linda Hirshman, arguing against intersectionality. In fact, Hirshman argues, a focus on how sexism intersects with other oppressions, such as racism, homophobia, transphobia, class, poverty, and so on, weakens feminism and excludes middle class white older feminists.

Well, I disagree strongly with this ‘perspective’. What kind of sisterhood is Hirshman invoking? One in which immigration politics is not feminism’s fight? How about this?

It’s not just about solidarity – it’s about the fact that if we don’t understand intersectionality, we will simply be ineffective in tackling sexism, because we won’t understand how it is being played out in our societies.

Anyway, I’m not going to go through this article point-by-point as others have already done so very effectively:

I recommend reading Having Read the Fine Print… for a thorough dissection of this article – particularly Blackamazon goes into some of the specifics of how Hirshman’s article was inaccurate and misrepresentative, who she did and did not interview and more.

Photo by Trishhhh, shared under a Creative Commons license