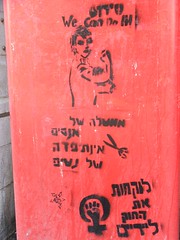 This is an interesting one – there’s a feature up on Haaretz.com profiling a high school in Israel which has introduced gender studies classes.

According to Henya Shapira, the coordinator of gender studies for girls at Mevo’ot Eron, “the girls are drawn toward the support group; they prefer those talks to classes on the history of feminism.” The result is discussions on how to deal with a restaurant manager who doesn’t pay a waitress’ salary, the girls’ relationship with their mothers or sexual relations with a boyfriend. There is one strict rule all must abide by: Everything said in the classroom stays in the classroom.

“We are trying to understand what the right path is for each issue and to clarify what each of us thinks,” says Ravit Inbar, a senior. “If one of the girls has a new boyfriend, the discussion immediately moves to the issue of sex. It is totally irrelevant to talk about these things with the boys. Each of us knows she can talk about whatever she wants and it will not go any further [than the room].”

In the boys’ class, displays of feelings and openness are far more rare. Most of the discussion in the boys’ gender studies classes deals with conventional social concepts, such as keeping one’s distance from girls who hit on boys.

This is interesting too:

When the gender studies classes started, Dori recalls, there was a furor over [teacher] Rakefet Zohar’s remark that giving boys gender classes was like casting pearls before swine.

“Today I would never think of saying anything like that,” Zohar says. “We were more radical back then, and the situation was tougher, both among the boys and within the school administration. In time, we moved from a status in which we were feminists first and only afterward female educators, to the reverse. All in all, this is a revolution that succeeded. In the first year or two, people thought we were crazy. Now we are running the school.”

There has been a certain trickle-down of feminist attitudes. Eight years ago, when the gender studies classes first kicked off at Mevo’ot Eron, the boys went to gym class while the girls met for gender study sessions. A year later, male teachers and students also began to benefit from the project. In the past few years, the boys have requested that at least some of the classes be co-ed. Some teachers have softened their stance on this question, but Zohar, for one, is still firmly against the idea: “Our whole life is an encounter with males. There has to be a place that is ours alone.”

You’ve got to wonder what sort of feminist-slanted attitude the school takes to the Palestine/Israel situation, but still. Wouldn’t it be good to see gender studies classes in UK schools?

Photo by nicasaurusrex, shared under a Creative Commons license