Get back in the kitchen – Wired commenters to science writer 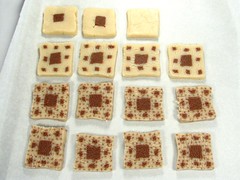 Only a week after me and zohra spoke at the Guardian panel on online misogyny, before we’ve even had time to digest, a friend sent me a link to this post by Anna Kushnir, a science blogger for Nature Network.

Interesting reversal, isn’t it? We go from 7 to 1 in grad school to roughly 1 to 7 in professorships.

Clearly, something does not compute. Where did all the women go? What is happening to all the women en route from graduate school to professorship? Where is the leak? Then again, is it a leak, or more like a pressurized stream? What is applying this pressure to force women out of a career in science? Is it societal pressure to be a mom and take care of the family? Have generations of both men and women perpetuated the belief that in a fist fight between family and work, one or the other has to crawl away a loser? Do some women lack self confidence and convince themselves that they don’t have what it takes to succeed in academic science?

Indeed, she is considerably more more muted than I would have been, but then Anna is a science blogger not a feminist blogger, after all.

One comment, not by any means the worst, but pretty typical of the dismissive and defensive response to Anna’s post:

I thought you had some quality control. This would be an excellent post for a personal blog bemoaning the fact that women aren’t ruling the world. Opinions, emotions, hand-waving and all! But for this site? I hit the end of the article and thought, where did the rest go? Because obviously someone should have rejected this little tantrum and not confused it with real news.

As Anna puts it:

I proposed a few specific small changes (nothing earth-shattering, nothing inventive), which could potentially affect a woman’s decision to stay or leave academic science. I had hoped that people would actually read the post before giving in to the knee-jerk reaction of labeling me a conspiracy theory-loving, man-hating bimbo who was awarded a PhD simply for being a woman.

Well, I guess I gave away the punch line. The responses to the post have been shocking. Borderline offensive, hurtful, occasionally ridiculous, and sometimes hilarious (“Shut up and go make dinner, you dumb b*&#%,” ranking in the top ten favorite).

Some of this is a moderation issue (I know, “Shocker! Misogynist attacks on writer dismissed as inoffensive by blog moderator!” but I still feel like I have to point it out). But lots of it just seems to be that many people are just unapologetically signed up to the patriarchy. For example:

Why do we have separate sports teams for men and women? Why cannot men give birth to children? Why are we so different?

Well, maybe we just should accept that we are different. There are so many things that are potentially or practically easier for women then men – and yet men don’t whine so much. Why do women whine so much anyway? Yay, another difference. It doesn’t matter to discuss it anyway, since the dumb political correctness will kick in anyway and stop everyone from reasoning correctly.

However, the most depressing note in this whole affair is struck by the first line in Anna’s post about the Wired commenters:

Why, oh why can’t I just keep my big mouth shut?

The men (yes, they are almost always men) who react to moderately-phrased posts pointing out gender inequality by filing hundreds of misogynist comments want exactly this. They would love it if we did just keep our mouths shut.

However, the commenters at Nature Network are, at least, supportive – the first comment identifies this for exactly what it is – verbal bullying.

Photo by L. Marie, shared under a Creative Commons license