Who are the Harajuku Girls? 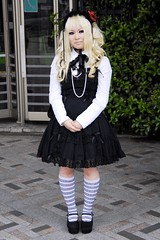 NB: I changed one of the words in the final paragraph of this article. The details can be found in the comments.

Harajuku is an area in the Shibuya ward of Tokyo, Japan. The term Harajuku Girls is commonly used in English Language media to refer to teenagers dressed in any fashion style there (Knight, 2007). The area’s young people have a reputation for being fashionable and, in particular, are directly influential on the publication Fruits (a fashion magazine that promotes the styles seen in the area). According to Wikipedia:

“Harajuku Girls may be members of various sub-cultures including Gothic Lolita, Ganguro, Gyaru, and Kogal and may also be dressed as characters from an anime, movie, or manga (known as cosplay).”

You might also be aware of the term “The Harajuku Girls” in relation to the back-up dancers that have appeared with Gwen Stefani during her solo projects. I admit I don’t know a lot about them and get the impression that this mystery is kind of the point. I also tend to find myself uncomfortable with this set-up when I see Stefani appearing with them in interviews and I never actually see them speak. Not even once. Again, I realise this is all part of the performance but can’t help wondering what Asian women make of all this. After all, Stefani is the one who gets to bask in their reflected glory, while also fronting the show as The Star (i.e the one who leads the gang and puts out albums with her name on the cover). The Harajuku Girls, meanwhile, look pretty cool but definitely seem to be appearing as ornamental aspects of the performance who, essentially, flank Stefani.

I have to say I wasn’t particularly inspired to alter my view when I got to the end of the interview with Gwen Stefani’s husband Gavin Rossdale in today’s Metro:

Metro: Does Gwen leave her Harajuku Girls lying around the house?

Gavin: Yes. They move out of the way if you ask them but who gets upset about having some Harajuku Girls in the house? They’re great.

Okay, okay… I’m sure it could be suggested that both Metro and Gavin were being firmly Tongue-in-Cheek when they uttered those words. After all, one could easily retort that the Harajuku Girls are professional performers who choose their projects and inspire fans with their style and presence. The performance is based on the concept that they are beautiful art objects and that’s all it is: a performance. This means killjoys like me should stop wringing our hands over all the privilege and try to appreciate it for what it is: again, a performance.

These reflections do not change the fact that my mouth literally dropped open when I read that final question in the interview. Is it really misguided of me to ask what exactly is going on here?

Are the Harajuku Girls stylish and formidable performers who have effectively sculpted themselves to become an impressive human art form or are they just playing out some awful stereotype that portrays Japanese women as silent, supportive and decorative?

Photo by Extra Medium, shared under a Creative Commons Licence.