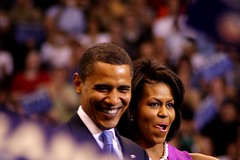 Gina McCauley of the fabulous blog What About Our Daughters, has a great post on Comment is Free about the way the US media has leapt on Michelle Obama demanding a makeover.

Michelle Obama doesn’t need a makeover. She was a classy, eloquent spokesperson for her husband’s candidacy. What needs making over are the puny little minds of the editorial decision-makers in this country who once again are forcing an accomplished professional spouse of a man seeking high office to contort herself to fit into their tiny little archaic boxes.

She deals really well with the furore over Michelle apparently being “unpatriotic”:

The truth is that any woman who would submit her children to the circus-like gauntlet that has become the presidential nomination process in this country, has a deep unwavering love for her country. Only a woman who loved her country would be willing to sacrifice so much and endure the negative stereotyping, spurious rumours and the incessant chatter from prognostitutes psychoanalysing her decision to go sleeveless and wear the colour purple.

Great stuff. And given the volume of bullshit being directed at Michelle Obama in the media, sorely needed.

Photo by Wa-J, shared under a Creative Commons license