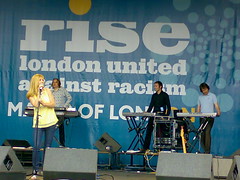 The Rise festival in London will no longer be advertised as specifically anti-racist, thanks to a diktat from the Mayor’s office, Dave Hill says over at the Guardian today.

From its inception in the mid 90s – when it was known as Respect – it’s been a campaigning event, explicitly opposing racism. Originally organised by trade unions, it became primarily a GLA promotion from 2001 and until this year its agitational purpose was never in doubt. But when the GLA’s proposed poster for Rise 2008 began circulating among Rise’s union sponsors this element was absent from the artwork. There was no mention of anti-racism at all.

Then the National Assembly Against Racism (NAAR) issued a press release saying: “We were contacted by the Greater London authority last week and told anti-racism will no longer be the central message of the Rise festival,” and claiming that “the sincerity of Boris Johnson’s claimed commitment to opposing racism in his election campaign is shown to be false”. 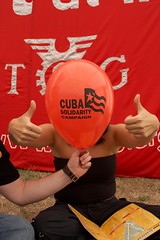 Meanwhile, Cuba Solidarity has also been told it’s not welcome:

The Cuba Solidarity Campaign (CSC) has also been told that its annual Big Cuba Fiesta stage is barred from this year’s event.

The Greater London authority’s director of arts policy , Munira Mirza, told the group in a letter that “it is no longer appropriate to have overtly political organisations involved in the programme or in the community area”.

Am I surprised? No. Expect more of the same until at least 2012.

Photos by j-sin and Luke Robinson, shared under a Creative Commons license