Sisters – or mothers and daughters? 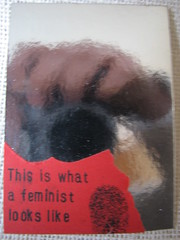 Why does the ‘mother-daughter’ theme of generational conflict continue to plague feminism, asks Polly Cassidy, in this guest post

I went to a talk at Housman’s bookshop in London last Friday, given by contributors to the anthology ’68-’78-’88: From Women’s Liberation to Feminism. The talk was hosted by Gail Chester, who was prompted to commission the book in the late ’80s by the exclusion of women and the women’s movement from the nostalgic celebrations of the 1968 anniversary.

It was really interesting to hear these perspectives on how things have changed. My eyeballs began to bulge slightly at the mention of ‘young women’ and ‘young feminists’, terms that were used fairly interchangeably. The women present were critical of the lack of active protest from today’s generation, and the tendency to ‘reinvent the wheel’ by revisiting old arguments and divisions. One woman thought the actions of current feminists are so insignificant that they don’t add up to a movement at all.

I was irritated by some of the views expressed about ‘young feminists’. I don’t want everything I do to be couched in terms of when I was born, or whether or not it lives up to the amazing stuff done by women in the ’60s and ’70s. Feminism momentarily seemed like a very heavy mantle to bear; there are fewer of us, the laws around protest are much more restrictive, politics is more insipid, and it’s much harder to use the dole to fund your activism. How could we ever live up to what these older women had done? I wanted to resist the broad brushstrokes being used to lump me in with a group of women who don’t bear contrast with the previous generation.

My next thought was that I was as much a feminist as anyone else in the room, and that feminism is not some kind of gymkhana in which different generations compete against one another. The older women were saying ‘young feminists’ in the same way young women often say ‘older feminists’ – a blanket term for ‘those other women I don’t have much contact with or can’t be bothered dealing with’.

A discussion on the FAF list over the last few days has covered similar ground, prompted by a proposal for a book called New Feminisms: mapping out the lines of feminisms-to-come, which “aims at creating an experimental space for new voices, thinkings and practices of feminism to be articulated—the ‘new’ entailing the capacity to move away from (though not necessarily reject) the ‘past’ of feminism as a moral, interpretative body of knowledge and experience, in an attempt not to dismiss the latter per se, but its status and workings as a prior enunciation, a savoir that engenders present and future imperatives to feminist thinking and practice.” Posts on the FAF list in response to this criticised the overly complex language, which could exclude some people, and there was ambivalence about whether contemporary feminism could be described as ‘new’. Do we need to “move away from (though not necessarily reject) the ‘past’ of feminism”? It seems to me that the New Feminisms proposal and the discussion at Housmans both suggest there are two generations of feminists, and that there is a disconnect between them characterised by mutual suspicion.

This relationship feels more like a mother-daughter bond than sisterhood; close links verging on dependency, but also a touch of tension, judgmentalism and an inability to enter each other’s world. It is a false, or at least an arbitrary distinction between different generations of feminism; older women are still around and still active, and there are feminists in their 30s and 40s as well as their 20s and 50s. There never have been two neat parcels of feminists in two age groups and with two distinct perspectives, but we often act as if there were.

There is so much to be gained from feminists of all ages and background working together. We don’t have to think about what’s going on now as some kind of zero-hour for a new movement, either in terms of activism or theory. Why not think of what’s going on now as a development of what went before? It could be really exciting and enriching.

Photo by mollydot, shared under a Creative Commons license