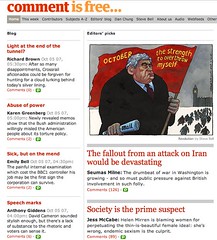 As Jess posted on Wednesday, I joined a conversation with her, Jessica of feministing, Kira of the Guardian Women’s Pages and Jemima of the techy space at the Guardian this week about ‘women on the net’. Caitlin Fitzsimmons’ write-up is a great start, but isn’t able to do the full conversation justice, so I thought I’d write out some of what I’ve been reflecting on in more detail. I had so much to say though that I’ve had to split the post into three!  A full podcast of the event is available here.

Part 2 of this series is here, and Part 3 here.

Participation can hurt
My first experience writing for Comment is Free (cif) was slightly traumatic. The level of personal abuse in the comments was so high that I felt emotionally attacked and drained as I participated. I felt particularly harassed because the attacks were about my gender, race and religion (as opposed to people just calling me stupid, say). As a result, I took a significant break between that first post and my next post.

The existence of rampant misogyny, racism and Islamophobia on cif is no secret. When I chose to write a second piece for cif I did so in the knowledge that I was likely to face a similar level of abuse. I therefore only took the decision when I felt that I had something I wanted to post that could benefit from an airing on cif – when my political agenda made it expedient. And I did it when I knew I would have time and energy to troll through the comments; I knew I would have to read through abuse to get to the content-relevant contributions.

Other women who write on the net face this choice too. Writing and engaging on blogs is emotionally costly. This has to be weighed against any benefits. For me, working at Fawcett and campaigning on issues of race and gender mean that when I write for cif (which I do in my Fawcett capacity), I will be covering topics that make me a target for abuse. My decision to write or not write for cif then becomes tactical: what will I gain by blogging on cif? And is this worth my professional and emotional time and energy?

As a woman of colour, I face the threat of a different kind of misogyny than white women bloggers face. As a woman of colour writing about race and gender, I am putting myself at particular risk: if I were writing about, say, phones (?!), I could perhaps be expected not to face racism and sexism online, or at least not as much. Race matters both in terms of the writer and the content of the writing.

I have chosen not to provide a picture for my profile on cif because I didn’t want to offer more fodder for the sexist racists and the racist sexists to work with. To my mind, the absence of the picture means commenters are at a bit of a disadvantage. Do I kid myself that not knowing what I look like means that readers have to evaluate my writing with more consideration? That they can’t just say, ‘well, she’s just a ___’ because they don’t know if knowing what I looked like would tell them that I’m clearly not a ___?

Maybe I should do an experiment. Change my profile pic as I post different pieces and see if the nature of the comments changes. One day be in hijab writing about Muslim women, next day in full piercings and perhaps looking like I have a shaved head but still writing about Muslim women. Or post the same article under two authorships – one copy under me, and another under, say, Jess or a male blogger. Or both! Then we could really establish whether race or gender gets the rawest deal (as so many people are – ridiculously – trying to compete about, but I digress).

Photo by The Sizemore McCabe Project, shared under a Creative Commons license