Women trafficked to Afghanistan to meet ‘demand’ from Westerners 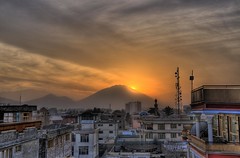 According to AP (via Womensphere), Chinese women are being trafficked into Kabul to meet demand for prostitutes from European and US men working on ‘reconstruction’ and ‘security’ in the city:

Paradise is a brothel in an unmarked residential compound in an upscale Kabul neighborhood where prostitutes from China cater to Western men. Since the U.S.-led invasion in 2001, thousands of Westerners working for security firms, companies and aid groups have poured into Afghanistan. Not long after came Chinese prostitutes, in some cases trafficked into the country.

This is bad on every count – according to AP, women are being trafficked into the country, forced into prostitution, and then if discovered treated with little sympathy by the police. Meanwhile, other Asian women are being targetting and harassed:

The International Organization for Migration helped 96 Chinese women who were deported in 2006. They told IOM they were deceived by a travel agency in China and promised employment in a restaurant for $300 a month. But when they arrived, they said, the Chinese restaurant owner denied them salary and forced them to provide sexual services by night.

An IOM staffer said one Chinese woman thought she was going to work in Dubai, United Arab Emirates, and had no idea she had instead landed in Kabul.

“They come here of their own will. They want to do business here. Police caught them red-handed,” said Gen. Ali Shah Paktiawal, head of Kabul’s criminal investigations.

In recent years, Afghan authorities have carried out a campaign against moral corruption, raiding brothels fronting as restaurants and deporting the Chinese prostitutes in front of TV cameras. Last year in Kabul, 180 female prostitutes were arrested — 154 “foreigners” and 26 Afghans, Paktiawal said. He would not give the nationalities of the foreign prostitutes, but many raids in recent years have been at Chinese restaurants.

Many Afghans blame prostitution on immoral Chinese women and Western men and say it is un-Islamic. The highly publicized crackdown on Chinese prostitutes has led to rampant harassment of women of East Asian origin. Police often single out Asian women in spot checks on Kabul’s streets.

Also see how Western-led efforts to crack down on poppy farming in Afghanistan have driven farmers in the mountains near Jalalabad to extremes – one farmer interviewed by the BBC was forced to sell his six-year-old daughter to be “married” in order to pay off a loan.

Photo by jorr81, shared under a Creative Commons license