Crap Word of the Week: Gastrosexual 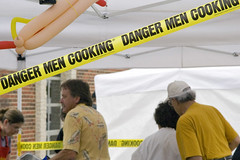 We’ve seen the so-called metrosexuals and ubersexuals (courtesy of the trend experts) and now we have the food company PurAsia commissioning a report on the apparent “Emergence of the Gastrosexual.” We’re told (click on the PDF on the left of their page) this is a term used to describe

…masculine, upwardly mobile men, aged 25-44, who are passionate about cooking and the rewards that it might bring – pleasure, praise and potential seduction.

Aside from the glaring traditionalism suggested by their unquestioning use of the word “masculine,” this all sounds very compelling but is making the whole thing sound like a sex craze involving the contents of people’s stomachs really the most honest way to demonstrate their findings? I know “sex sells” and all that but it sounds to me like some branding expert considered the seduction part and decided the public would only be able to muster up any interest in the phenomenon if they forgot all the other factors and focused on the sexy bit.

The background is this: PurAsia are just about to launch a new Asian cooking product. They say they commissioned the report because they realised they needed to consider men more when looking at their “target market.” Sounds fair enough. However, it looks like there’s no need for gender traditionalists to worry that such inclusion will challenge the status quo because the report frequently refers to how these “unabashedly male cooks” approach their cooking in a so-called “male” way (whatever that means). Oh. So, in case we were wondering, these guys are not at all like women or anything shocking like that. No way.

To be fair, it’s not all retrogressive stuff. Professor Melanie Howard is quoted saying:

But no! Wait! She also says “it is actually a more rewarding and creative form of domestic contribution” (more rewarding than the bits women can still expect to do?), along with this:

Many celebrity chefs are conspicuously masculine, red-blooded men. There is no suggestion that cooking is anything less than manly, which I think does make this field more attractive to men – and can actually also appeal to women.”

The message coming through here is that men will only take an interest in something traditionally seen as “feminine” if they have macho role models to show them it’s still “manly.” Isn’t that rather insulting to men? I’d say yes because, even today, it seems they are widely assumed to be so utterly misogynistic that their every move must be informed by reassurance from other men that they are still part of the gang and still very different from women. How sad.

On the one hand, we are being told this is a case of men being progressive. On the other, it is being admitted that it’s macho. Either way, there have certainly been some contradictory messages contained in the reporting on this issue. On a more positive note, there were guests* on BBC Breakfast this week, arguing that the matter is “more of a new man thing than a macho one” but this was slightly soured by the admission of one guy in their vox pop that he “leaves the practical stuff” to his girlfriend. Much as I’d like to be optimistic, I would say this sounds very much like the scenario one my boyfriend’s chums described when she said her boyfriend loves cooking so it is her job to do the clearing up. Each to their own when it comes to private arrangements in relationships but it sounds to me like he got the better deal there.

In keeping with the argument that this is an all-too-common state of affairs, the presenter Sian Williams suggested women are often expected to multi-task and undertake a number of domestic chores, while men are given more opportunity to choose one job they can take pride in. Interestingly, one of the guests replied that it doesn’t matter that some men don’t like to clear up because we have dishwashers now and that means “everyone can have fun.” I guess he actually meant to say everyone who can afford a dishwasher can have fun. Oh well. I suppose those who can’t will just have to battle it out if no-one wants to clean up. Someone’s going to have to buckle aren’t they? But, surely, when it comes to domestic work, whoever does it and however dull it is, it’s still important?

The trouble is that we seem to still be living in a world where work only becomes worthy of respect if it predominantly becomes “Men’s work” and understood as something that does not detract from “manliness” if a man does it. Sadly, I’d say this study is a symptom of that.

Photo by McBeth, shared under a Creative Commons Licence.

Please note that no-follow tags were used for the link to the PurAsia site.

* I didn’t catch the names of the guests who appeared on BBC Breakfast this week to talk about men and cooking so if you know who they were, please get in touch!