Reader Alice sent over this photo of the Feminist Fightback demo in support of the striking Tube cleaners, at the headquarters of Transport for London: 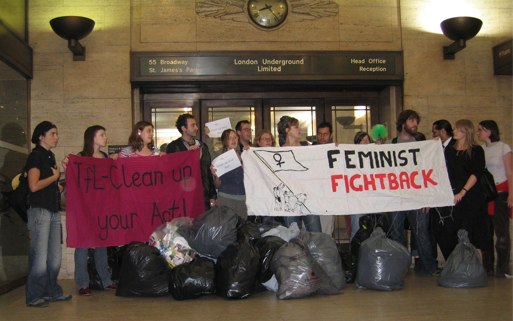 Also see this excellent write up in the New Statesman:

So, why is the tube cleaners’ plight a feminist issue? Well, for a start most tube cleaners are women and Feminist Fightback feel that cleaning has been “underpaid and devalued as a ‘women’s industry’”. At £5.50 an hour, tube cleaners are certainly underpaid and undervalued. The 700-800 RMT members have a list of demands that brings shame to Transport for London (TfL) and its cleaning sub-contractors. They want a living wage, sick pay, 28 days holiday, final salary pension, free travel and an end to third party sackings. As well as the expected level of unpleasantness involved in the work, tube cleaners claim to face grim conditions: on-the-spot sackings, having to clean faeces with their bare hands, using unsafe cleaning chemicals and cleaning eight stations at a time on their own. On top of this, many workers face intimidation over immigration status. Despite Transport for London’s insistence that the strike was “completely unnecessary” it is about much more than the simple pay dispute TfL claims to be fixing.

And what are the Tube workers striking for? Their demands are very modest.

One concrete thing you can do* is check whether your MP has signed this early-day motion, calling for conditions to be raised for Tube cleaners. If she or he has not signed up yet, a judicious email might persuade them…

*Other than by not dropping your litter on the Tube! See also vomiting, if it can be postponed. I struggle to believe there’s really such a thing as ‘littering in solidarity’, unless it also involves ‘cleaning up afterwards in solidarity’.