You may remember a controversy a couple of years ago about remarks made by Larry Summers, former President of Harvard University. He suggested that the reason there are fewer women than men at the high end of scientific research is (among other reasons including discrimination and cultural factors), because more men excel in those subjects. He was subsequently fired for his remarks.

Ealasaid Gilfillan wrote a really interesting piece on this controversy for The F-Word, back in 2005.

Since then, Summers has been turned into a pariah figure for those who think women don’t get the top jobs because of discrimination, and a martyr to those who think the liberal agenda is to censor the results of scientific research. Both points of view seem to me to be simplistic and wrong.

The debate has been reignited this week by a new piece of research (paid content) which both sides of the debate claim prove their respective points and, by extension, either condemn or exonerate Summers. Jessica at Feministing and Jeff at Alas, a blog! (along with much of the mainstream press) are claiming ‘victory for girls’ as a result of this paper, but they’re wrong. What this paper says actually backs up Summers’ remarks. But it (like Summers) tells part, rather than all, of the story.

The paper finds that, on average, girls score as well as boys in standardised maths tests (at all ages) in the US schooling system. On the other hand, and backing up what Summers said, it shows the variance around the mean to be consistently greater for boys than for girls – in essence, girls cluster more closely around the average performer, whilst boys’ performance is more varied. This is the part that has gone largely unreported.

So whilst it’s true to say that boys and girls perform equally overall, it’s also true to say that more boys do exceptionally well or exceptionally badly than girls. The top 1% of achievers in maths is disproportionately male (and disproportionately white male at that). Tellingly, I haven’t seen anyone claim this means white folks are smarter – presumably it’s obvious to everyone that socio-economic factors play a pretty big role in test scores.

The study suggests, essentially, that Summers had the beginnings of a point. What it doesn’t do is justify the triumphant crowing of those who would have you believe that men are at the forefront of technical fields is because boys are brilliant and girls are rubbish (and should stay at home baking). 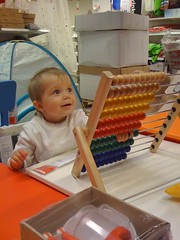 For a start, the fact that the test results of boys and girls have equalised by so much in just a few decades suggests that there’s nothing very much innate about any performance differentials that exist. It’s true to say that *right now* more men are maths geniuses than women, but it seems plausible that the pattern will continue to change.

Then we have the question of culture – the discussion thread at Marginal Revolution (which is really interesting) spends some time discussing whether other factors interact with pure ability when children take tests. You don’t need me to point this out to you, but, for one, the role of parental expectations and encouragement may frequently be gendered. For two, the role of peer group interaction and its effect on an individual child’s motivation to succeed in particular subjects is likely to be a factor. And highly likely to be gendered as well.

And once we’re done with all of that, there’s still a role for good old fashioned discrimination. There’s endless evidence that discrimination still exists in all types of organisations and sectors. It exists during the hiring and promotions process, and it exists indirectly in most working practices. As Kate points out at the Cruella-blog, if there are more men in the ‘genius maths’ jobs purely because of innate ability, we’d expect to see correspondingly more women in the ‘average maths’ jobs – such as accountancy or tax – but we don’t.

Add to that the unequal position of many women in the household (overwhelmingly primary carers for children even where two parents are working and more frequently single parents) and it ought to be obvious that workplace advancement is based on more than just ability (or even test scores).

Some of those factors will be ‘personal choice’ but the definition of choice becomes increasingly meaningless when it’s considered as the cumulative result of economic and cultural imperatives. (I’ve talked about this before).

People who are trying to tear down Summers, or to use this study to ‘prove’ that women are as good as men are missing the point. The scientific ‘fact’ of this article is a jumping-off point for thinking about how gender interacts with ability, not a case closed. The data shows what it shows, but it doesn’t tell us much about the causes of these differentials. It raises more questions than it answers.

First image from xkcd – and yes, it’s good to give this another F-Word airing!

Second image by ntr23, shared under a creative commons license