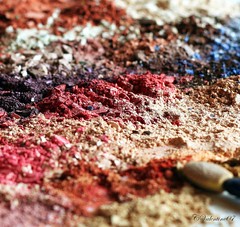 A few make-up products are to be sold in highstreet chain Superdrug, aimed specifically at men – prompting fascination in the Guardian offices.

Not only have they interviewed a random selection of men on whether they would ever wear mascara or concealer, they have found an in-house man to try it for himself, on video.

First off, no, it’s not a good thing that even more human beings are now being targeted by big cosmetics firms aiming to make a buck from people feeling bad about how they look au natural. It’s interesting in particular because the products that have been released so far are focused on being nearly (or actually imperceptible). According to the Guardian, these products include clear “manscara” (eehldff). Thus make-up for men is apparently all prettying-up, no art & creativity – at least for now.

Then we have the attempts to macho-up makeup – it must be clearly labelled “for men”, “manscara”, and tried out on fully-bearded men. Presumably so as not to scare off male customers, by removing as much association with femininity as possible.

See also the words of one of the random men quoted by the Guardian:

But are Britain’s men ready to start the day by enhancing their eyes or concealing their bags? Not according to 17-year-old Damon Aston, a jeweller from Watford, who agreed to try Guyliner, but couldn’t wait to get it off. “I would never wear it. It’s not manly, it’s just gimpy. I’m not that kind of boy. I don’t think girls would like it. It depends on the girl, but not the ones who like proper boys,” he insisted.

Oy – “proper boys”? “gimpy”? “not manly”? Sexism and some implied homophobia there, I believe.

Why has this changed? Why, oh why, oh bloody why? Some will see the emasculation of men at the root. Deprived of national service, of manual labour, they sit in office blocks their entire day contemplating the futility of their existence and whether their skin is quite luminous enough. Others will cite the comprehensive triumph of feminism. Having reduced the patriarchy to a quivering mass, men are desperate to try anything, even kohl, if it might persuade their new masters to look upon them kindly.

These major caveats aside, I think this is still edging towards being a good thing (in as much as anything which involves marketing stuff at people ever can be). Fundamentally, the availiability of things like “male” makeup helps to remove a few bricks from the wall seperating what we’ve deemed “real” male and female behaviour. So, while the patriachy isn’t quivering yet, I think that the fact that “men’s makeup” provokes a backlash is a sign that it’s a small form of progress.

Photo by Cvalentine, shared under a Creative Commons license