Off Our Backs in imminent danger of folding 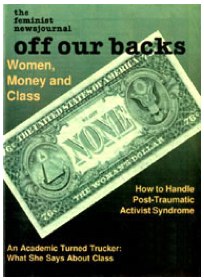 [Update: Please read comments below – there are serious criticisms of this journal which I wasn’t aware of when writing this entry.]

US feminist journal Off Our Backs is so short of funds it may be forced to cease publication, WIMN’s Voices reports.

They are in the process of producing what may be the last issue of OOB unless funding comes through. I am guest-editing that issue which will focus on women and peace. It is an amazing issue with essays from more than 20 women from around the world and I feel very privileged to have been able to work with Off Our Backs to produce this collection of urgently needed woman wisdom. To be blunt, I had approached several other feminist publishers about working with this material and they were not able to do it and let’s face it, women talking about peace tends not to be a financial winner in the publishing biz. If it were not for OOB, I don’t know if publishing this work would have been possible.

An honour, or a shame, to be the editor of the last issue of a 38-year-old feminist publication?

OOB is appealling for donations. If you’re in the position to do so, I should imagine that buying advertising space would be just as welcome, though.