The BBC has just reported that 500 trafficked people including 12 children have been freed at the end of the Pentameter 2 operation. Lets just hope the Government does treat the trafficked women as victims of crime and not as illegal immigrants….

However the BBC outdoes itself in crassness by using this picture: 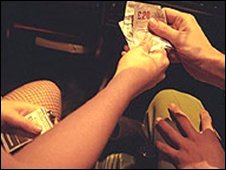 The problem? It gives a stylised portrayal of “prostitution” where a woman in fishnets is receiving money from a fully clad man ignoring the fact trafficked women forced into prostitution will generally never see the money they earn – if they did they’d be a chance they could work out they were paying off their “debts” and could claim freedom which would then necessitate further violence on the part of the traffickers/pimps. It’s wholly inappropriate for the story.

Also on a similar story is this report from Tanzania reporting the freeing of 36,000 girls from both forced prostitution and forced domestic slavery. But it also points out that the two are not mutually exclusive with most of the domestic slaves also being sexually assaulted by their “employers”/captors. One of the problems remains poverty:

Of the 36,000 girls that were rescued from child prostitution, 25 per cent or about 10,000 girls were engaged in exploitative domestic work while the rest were trafficked. “What is stunning is the fact that 60 per cent of them were brought to the city by their families or people closely associated or affiliated to their families,“ reveals Mwaituka [Executive Director of Kiota Women`s Health and Development Organisation (Kiwohede)”