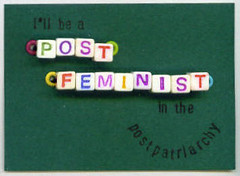 In Surviving Sexual Violence Liz Kelly talks about the Woozle Effect – the notion that something repeated often enough will attain the status of a common-sense “fact” whether it has any truth to it or not. I start with this vague ramble because it’s so inherent in discussions of post-feminism, which lately have happened because of Joanna Murray-Smith’s play The Female of the Species opening in the West End. The play, loosely based of the incident where Germaine Greer was held captive by a student for several hours, has been broadly discussed by the press. Not least after Greer dismissed the writer as “an insane reactionary” who “holds feminism in contempt” and the play as “threadbare” and “unfit for the West End” (The Telegraph and (also) The Telegraph). The Guardian, however (who really should know better), begins their review by asserting that the play is clearly about “the confusion faced by men and women in the post-feminist age.” (The Guardian). Confusion? Post-patriarchy? I don’t know where to start. As this piece from Cath Fletcher points out maybe for the privilege wielding readers of the Guardian (myself included) this might appear to be true – it only works if we ignore empirical evidence about women’s lived experiences and presume it’s OK to gain equality by exploiting other women (behind almost every successful woman there is a cleaner, nanny, au pair or other less wealthy women propping up the achievements). As Fletcher says “The post-feminists point to the new super women of the bourgeoisie” as “proof” that we have it all. So what’s been said about the play – well the Stage has an interesting, dare I say insightful, argument to make:

to make her thesis work – that everyone is confused by the outcomes of feminism – Murray-Smith’s characters have to elect themselves as stereotypes. The dim, often-absent husband who spouts correct “new man jargon”, the wife longing for the excitement of caveman maleness, the deserted husband reverting to pre-feminist type. Feminism can take a joke, but the arguments here don’t do it justice.

To this the Guardian adds:

I also think feminism is big enough to take her satire, especially the notion some proponents enjoy intellectual provocation for its own sake and are unaware of the impact of their contradictory arguments on ardent disciples.

It’s also noted that whilst claiming to be in the style of Shaw’s farces, Murray-Smith never allows a dialogue between viewpoints, relying instead on sequential narratives. And therein lies one problem because feminism isn’t about a claim to the single truth, it’s, as Ailbhe Smyth has said, an interruptive strategy – something which talks to and with (i.e. dialogues) mainstream and non-mainstream views. Feminism has always been about challenging and you can’t do that without conversations. To claim post-feminism is, again, a claim to a single narrative. “We” have it all can only exist if “we” are a clearly defined group because it’s so obvious that not all women do have it all – rape victims who are disbelieved by the Police or never see the rapist brought to trial; women in the sweatshops and EPZs of the developing world; the women of Darfur and so on. “We” have it all is totally predicated on the notion that we only need to look at the advantaged – because obviously we judge societies on how we treat the strongest, not the weakest, don’t we? Murray-Smith argues she is a feminist but I have to wonder of what sort? Of the sort only concerned by the experiences of similarly privileged women maybe? Have we really returned to the blinkeredness of some writers from the 1960s and 1970s so soon? By the way The Telegraph‘s view was the much less insightful, “It’s hugely entertaining, unless of course you happen to be a humourless radical feminist”. Par for the course I suppose and from someone who I guess might find this distasteful comment on political “satire” from the Washington Post, funny.

[The image previously in this post is no longer available online, November 2021]

Hat Tip to The Curvature for the latter.