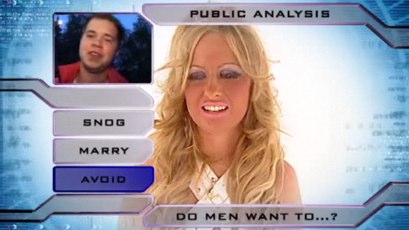 It’s like the execs at BBC3 sealed themselves in a room and tried to think of the most sexist idea for a makeover show ever. Thanks Flying Saucer for letting us know about Snog Marry Avoid, a “make under” show presented by Jenny Frost and a reality TV version of HAL. Presumably the mean comments would have sounded a little, well, meaner if not delivered by a children’s TV-esque fake AI.

During this make under, the apparently overly made-up volunteers are asked to select whether male members of the general public would, you guessed it, “snog”, “marry” or “avoid” them. Then they predictably get to watch footage of random blokes saying they’d avoid them, only to be informed that around 75-100% of men agree (I’m sure the sample size was very reliable).

Where to begin? With the reduction of women’s self worth and image to what percentage of men on the street want to get off with them? Or the fact this is yet another addition to the ranks of programme that centre on ‘fixing’ women? (And one man, but even he came with a wife to make over too, and co-incidentally they had their original look validated as an expression of individuality by the presenter).

UK readers can see the latest episode on the iPlayer.