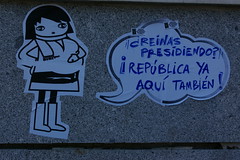 The 60th Carnival of Feminists is out now! This issue is over at Unmana’s Words and features lots of posts from Indian bloggers – The Life and Times of an Indian Home Maker on joint families is particularly interesting.

Jezebel bloggers Moe and Tracie (who posts as ‘Slutmachine’) were interviewed in front of a live audience, and the whole internet. They were drunk, and said stupid things – Tracie said that she’s never been date raped because she’s smart, and the men in her area are not assertive. The interviewer said things that were just as stupid – including chastising Moe, again, in front of a studio audience and the whole internet, for not reporting being raped. Feministing has the whole story.

Remember that post of Sinclair’s at Sugarbutch Chronicles we linked to last week, about who to trust on the Internet? Well, Renegade Evolution has uncovered a really good example of this – a male blogger who identifies as a radical feminist, and is still posting as a radical feminist, even after pleading guilty to filming an unconscious female student’s breast, and said he assaulted her. Via Galling Galla, who has links to lots of blog coverage of this incident.

South End Press, which publishes work by greats such as bell hooks, is struggling to stay afloat and urging fans to join its Community Supported Publishing initiative.

Men also have a biological clock, reports the Guardian. Will this be an end to those panic-stricken articles about women, and only women, leaving it too long to have kids, thanks to their selfish desire for a career?! Or will they be accompanied by similar articles about men? We’ll see, eh?

Nick Clegg, leader of the Lib Dems, is pushing for action on homophobic bullying in schools – Lesbilicious has more.

Meanwhile, Comment is Free is running a series this week on women’s role in the public sphere. Check out Diane Abbott’s post about her experiences in feminist groups dominated by white, middle-class women:

But, in practice, the unrelentingly white and middle-class nature of the modern women’s movement has repelled many of us. Inspired by Simone de Beauvoir and Betty Friedan, I joined my first women’s group in my teens. I felt a little out of place among the white suburban housewives, but I persevered. However, when they started planning a fundraiser that featured a black male stripper, their knowing sniggers got to me and I fled. As a Cambridge undergraduate, I tried again. I was the only black woman in the student-only group, but that was OK. Then they decided to invite a woman “from the town” to talk. The way my fellow students stared at that poor working-class woman, as if she was a laboratory specimen, was too much for me and I terminated my involvement with the formal woman’s movement.

Meanwhile Ala at Pickled Politics questions the focus on getting more women into Parliament, and into power more generally.

brandnewfeminist lays into some research apparently ‘proving’ that millions of pounds in productivity are lost every summer as a result of male workers getting distracted by what their female colleagues are wearing. As BNF puts it: “Women get blamed again. This time for the recession.”

David Cameron thinks the poor are to blame for being poor. And fat people should just quit eating so much. This is seriously worrying, considering the likelihood of him being elected next time around.

US surgeons compare women to cars; opt for more invasive and dangerous hysterectomy technique because it pays more! See MORAG and Our Bodies Our Blog for more.

Shakesville digs into why people react badly to the idea of dolls with disabilities.

Photo by gaelx, shared under a Creative Commons license