Women who will ink you 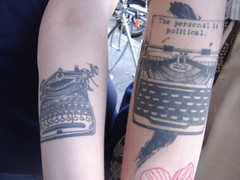 It includes an interview with Kat Von D, of LA Ink fame. But also women tattooing in this country. Such as Saira Hunjan:

“All my friends were going off to retail and to banks,” says Hunjan. “I got out the Yellow Pages, went through a list of all the tattoo shops in my area and called every single one of them.” She was met with a resounding no from everyone apart from Barry Louvaine, at the House of Living Art in Tooting. “He was the only guy that said to me, ‘OK, but come in with your mum!'” She did as he asked, with her mother tagging along willingly, assuming her daughter was just going through a phase.

Actually, there’s been an annual convention for female tattoo artists in the US for 13 years – the next one is Orlando, 2009. But Googling produces more stuff like this patronising collection of “women’s tattoos”, than this.

None of my three tattoos (done in London and California) were inked by women.

Photo by ekai, shared under a Creative Commons license