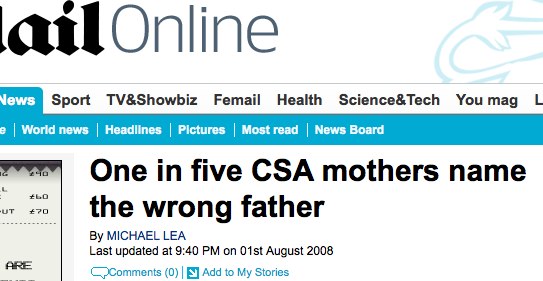 “One in five CSA mothers name the wrong father,” screams the headline for this story about the paternity testing by the Child Support Agency.

A shocking statistic? But one which is a total lie, contradicted only three paragraphs into the Mail’s own story.

Taking numbers only from the Mail’s own reporting, we see that CSA has a backlog alone of 121,000 cases. So, thousands and thousands of mothers must have “lied” in order to justify that headline, right? The actual number:

661 out of cases where 3,474 tests were ordered in the past year, not one in five mothers who applied for or received child support.

Even taking into consideration all of the cases in the entire history of the CSA where a paternity test has proved that the named father is not the biological parent, the figure is only 4,854. Meanwhile, according to this press release, 768,000 children received child support last year, an increase of 65,000 on the year before.

Let me remind you of the total number of paternity tests at the centre of the Mail’s story – 661.

Although the article is by no means as bad as the headline, the real story is not about hordes of mothers trying to trap men into paying child support, it is that four out of five fathers who asked for a paternity test found out that they were the biological father of the child. Or 80% of contested cases.

It therefore seems hard to justify the first two paragraphs:

Single mothers are deliberately naming the wrong man as the father of their children when making maintenance claims, it was revealed yesterday.

Others have had so many sexual partners that they are unsure precisely which one is the father, meaning they inadvertently give officials the wrong identity.

Yes, perhaps some women may deliberately name the wrong person, or may not know who the father is. But this headline and lede imply that it is extremely common, rather than a tiny minority of cases. By deliberately inflating the issue, the Daily Mail appears to be carrying out a campaign to shame single mothers, and women’s sexual autonomy more generally.

This, of course, from the same newspaper that runs moralising stories advocating that women’s access to abortion be constrained.

(Thanks to reader David who sent in the link!)