Games vs Girls – I don’t have the words 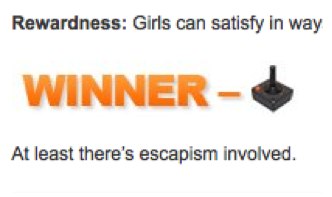 Games Radar begins its feature on “Games vs Girls: Which is better?” with the breathtaking revelation that “by far most GR readers are guys”. Probably need to tone down the lashings of sexist bullshit before attracting any female readers, “guys”.

In order to get to the bottom of the question literally nobody is asking, we’ve broken it into categories – Availability, Obtainability, Quality, Time, Cost, Reward, Social Benefits and yes, Sexual Gratification.

Yep, that’s right – three pages comparing women to video games, on the basis of things like how “available” they both are. To be honest, I could just stop here, couldn’t I?

But I read intrepidly on through paragraph after paragraph of this tripe. On women:

They’re everywhere. They’re in line ahead of you at McBurger. They’re laughing at unfunny scenes in films. They’re sucking their bellies in at the gym. They’re buying too-tight shoes in Steve Madden. They’re giving you the come on then wanting to ‘just be friends.’ They’re looking at pictures of Matthew McConaughey.

What they’re not doing, apparently, is playing video games. Because girls don’t play games, or do anything at all except act out stereotypes.

When we come to the “quality” rating (guess what, games win).

At one end you’ve got the Tofu-hugging, sandal-wearing, bead-threading, right-on gal (or should we say Ms.). She likes: whales, sitar music, trees, hugs. She hates: make-up, celebrities, modern things, other girls. Look closely and you’ll see the first wisps of a femme-beard.

At the other end, there’s the product of medialand’s infection by celeb-rabies. Typified by the kind of self-deluding, tottering bovine that wears nothing but H&M and the very worst of airport-lounge Eurotrash ostentation. Always in pink. Always seen pointing and gurgling at the pwitty pictures of Bwittney buying a stupid f***ing burger in a stupid f***ing magazine made up only of pictures. Always, but always, screeching into a cell-phone.

Roughly ¼ (if you’re lucky) of this will be spent doing something that makes you happy. The rest will be lost in a sea of favors, mall expeditions with purse-holding and money spent taking her special places. Buck up chap, because your reward for hanging in there surpasses any gold star a game might sheepishly dole out.

We’re talkin’ chores meals, or a host of sexual perversions she may be ready for. Yes, leveling up your Patience stat brings about more tangible riches than bragging rights at the latest murder simulator.

Spend enough time with your girlfriend, and she will cook, clean up and then sexually service you. Charming. It gets worse. Bear in mind, I’m not actually quoting the worst bits.

Negating obvious sexual fulfillment, ladies will reward you according to your aforementioned treatment. Don’t worry – it’s not like a game. You can’t accidentally drop a lady in the toilet (we’ve tried) or erase her memory (also regretfully tried). The time you spend chatting her up or playing pool might lead to untold riches. You also might learn a thing or two about the opposite sex, which will in turn assist you when you’re looking for a new girl after being inevitably dumped for a hotter, richer guy.