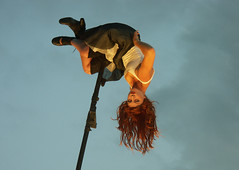 Regular commenter Redheadinred sent in this link about the “myths and history of red hair“:

Throughout history there have been many strange beliefs and ideas about red hair. In ancient Egypt red haired animals and people were associated with the god Set. The Egyptians also had many red haired pharaohs. However the Egyptians also regarded the colour red as unlucky and according to Claudie de Lys many red haired maidens were burnt to death to wipe out the tint. There are also stories of the Egyptians burying redheads alive! The ancient Greeks also had myths about red hair, including the belief that redheads would turn into vampires following their death. Unflatteringly the Greek philosopher Aristotle described redheads as being emotionally un-housebroken. Another mention of red hair came from the famed historian Herodotus who described a red haired and blue/grey eyed tribe in his histories called the Budini.

The Romans also had something to say about redheads. The writer Tacitus mentioned the ‘red hair and large limbs’ of the ancient British tribes and the historian Dio Cassius described British warrior-queen Boudicca, as being ‘tall and terrifying in appearance’ and as having a ‘great mass of red hair.’ Incidentally the ancient Romans also paid a premium for red haired slaves.

Yeah, so there’s some baggage. I think there’s probably some interesting things to be said about how gendered attitudes are about red hair, too – particularly the way that red hair in men is ridiculed, but in women is usually sexualised. Even the evolutionary biologists have had a go at this one, and you know that so often spells trouble.

Funnily enough, I was actually considering a post about this already – in particular the combination of red hair and freckles. I went to see Wall-E a few weeks ago, and caught the trailer for Le Renard et l’Enfant (the fox and the child), which is a documentary-style film about a young red-haired, freckled girl and her adventures with a fox.

The trailer hit a nerve for me. When I was a kid, I don’t remember very many (positive) images of girls (or women, for that matter) with freckles and red hair, which, in contribution with some vicious bullying, contributed to some image issues for me at a young age. Oh, sure, there was Annie, and, at a stretch, Anne of Green Gables. But, come on. Researching this post, I realised I also apparently imagined George from the Famous Five into having red hair! Sweep ahead a few years, to when I was in my early teens, and I suppose you could point to Ginger Spice.

And a look at some of the images on this site of red-heads in art shows that when red hair has been celebrated in women, it’s usually in combination with completely white skin – i.e. no freckles. And, frankly, I have plenty of freckles and hair that can only really be classed as red-ish.

When I googled “freckles” I started to get really annoyed – OK, there are lots of “ohh, they’re so cute!” pages, but way more like this website, apparently run by someone with an actual medical background about “How can freckles be treated?”, recommending treatments ranging from bleach to freezing them off. Any doctors reading this? Freckles are not a skin disease, thanks. Getting rid of them does not “improve” the appearance of skin. They are not a “skin discolouration“.