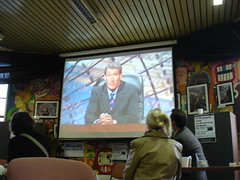 Jeremy Paxman, surely one of the most high-profile TV journalists in the country, thinks that “the worst thing you can be in this industry is a middle class white male”, reports the BBC (via Anji).

“If any middle class white male I come across says he wants to enter television, I say ‘give up all hope’ – they’ve no chance.”

“Is this evidence of some male conspiracy keeping women down?” he said.

But [Mariella] Frostrup told the festival: “He lists five women because he couldn’t possibly name all the men in positions of power in TV because he would be there all bloody day.”

She said women still faced prejudice, adding that she was once told by a TV producer there were so few women on a quiz show because “there just aren’t any intelligent women out there”.

“That’s what you’re up against – it’s that sort of assumption,” she said.

She added: “He talks about middle class white men being a beleaguered species on television. Well, excuse me, but Jonathan Ross, Jeremy on Newsnight.

“Look at the Today programme, Have I Got News For You, Newsnight.”

She said that she thought the industry seemed to be “a fantastic place for middle class white males”.

“They are very much judged to be the people imbued with a sort of gravitas that women are still struggling to achieve,” she added.

Photo by willismonroe, shared under a Creative Commons license