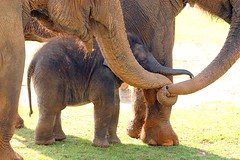 Research out of the US indicates that in so-called “fragile” families, mothers actually rate step-fathers’ parenting abilities as about equal to/better than biological fathers, as reported in The News & Observer.

Mothers reported that stepfathers were more engaged, more cooperative and shared more responsibility than their biological counterparts did, according to the study, published in this month’s issue of the Journal of Marriage and Family.

The findings contradict a popular view among social workers and family policy experts that biological fathers invest more in their own flesh and blood.

“I think this research does, to some extent, call some of those assumptions into question,” said Rebekah Levine Coley, a developmental psychologist at Boston College.

“It certainly shows that stepfathers or even unmarried social fathers can be quite productive in rearing children,” she said.

First of all “families prone to nonmarital births” is an, um, interesting way of putting it! It is individual women who give birth, not “families”, and I take issue with this categorisation. Basically, they’re saying that families including children born out-of-wedlock are “fragile”. Given that the findings of the research disrupted another big assumption about family dynamics, I think this is a bit of a dodgy starting ground. Then you’re just left with just “low income” as a proxy for “fragile”.

Secondly, the story reports two different findings – either stepfathers are more engaged (paragraph one of the quote), or they are equally engaged (last paragraph of the quote). They can’t be both, surely?!

Disclaimers aside, this provides more evidence on how biology is not the determining factor in good parenting, and also surely helps to contradict some of the blame directed at mothers who don’t stick with the biological father of their children. This is interesting too:

I like the phrase “social fathers”, if not the surprised reaction to the thought that marriage isn’t a pre-requisite for good parenting. The story doesn’t go into why social fathers might be more cooperative than biological fathers, unfortunately.

Photo by Today is a good day, shared under a Creative Commons license