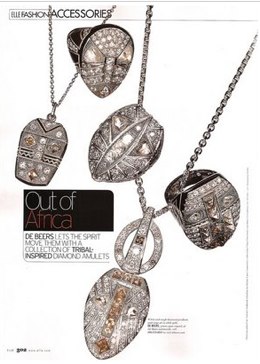 DeBeers has created a hideously offensive line of necklaces shaped like tribal masks.

As What Tami Said points out, given the history and current practices of this company, this is beyond tasteless, it’s fucked up.

Is Shirley by Charlotte Bronte a feminist novel? Deborah at The Hand Mirror considers the evidence.

Ifans, 40, who sprang to fame in the film Notting Hill, was asked by the station Q Radio to comment on a track by the band the Gutter Twins. The Welsh star expressed his enthusiasm for the act by saying: “It’s kind of like being date raped, which I like.”

When pressed further by the presenter on whether date rape was a good thing, Ifans added: “Well yeah, for guys.”

Evolutionary scientists are always eager to bring everything back to the gene pool. Phila at Echidne of the Snakes satirises them mercilessly:

I woke early, just like my hypervigilant ancestors did back in the Pleistocene. I considered getting out of bed, but then I realized that I ought to read for a while. After all, being able to display a wider range of knowledge than the next fellow could very well enhance my reproductive fitness.

I spent a pleasant hour with Baron Corvo’s The Desire and Pursuit of the Whole, which he wrote in 1934 in order to advertise his health and virility to the wealthy dowagers of Venice. Afterwards, I decided to go downstairs and see how things stood on the Internet. While it may seem to you like a medium of communication, I see it as a battlefield. Yes, a battlefield! For it is there that I go to overawe my male rivals, and dazzle those members of the fair sex who strike me as adequate receptacles for my precious seed.

Kit talks through gendered spaces at Today I Am A Boy.

The F Word – the other one, with Gordon Ramsey – featured a drink called Pussy on his show – see Womanist Musing for more.

Yes Jane, you can go to the fancy dress party as Spiderman. Here’s your costume!

Anti-China rhetoric continues to ramp up as the Olympics get closer – Madam Miaow points to one particularly vile example.

Meanwhile, a woman has lost a sexual harassment case in Russia because the judge said abusing women is necessary for the survival of the species, reports The Telegraph. (Via Jezebel. The unnamed 22-year-old woman was locked out of her office, after refusing to have sex with her boss – so far only two women have won sexual harrassment cases in Russia.

The Telegraph has some sobering statistics about the Russian workplace:

According to a recent survey, 100 per cent of female professionals said they had been subjected to sexual harassment by their bosses, 32 per cent said they had had intercourse with them at least once and another seven per cent claimed to have been raped.

Eighty per cent of those who participated in the survey said they did not believe it possible to win promotion without engaging in sexual relations with their male superiors.

And across the Atlantic, it looks like president Bush plans to veto legislation to promote equal pay, as one of his last acts in office – more at Feministe. Also see the latest Friday Feminist Fuck You for more on the crazy, anti-woman antics of the Bush administration!