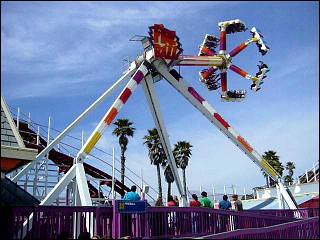 Summer brings on all sorts of strange behaviours – like paying money to be suspended upside down at high speeds and whizzed through the air at increasingly scary (or fun!) velocities. I am talking about Theme Parks (obviously). But consider this…. even the design of rides is so heavily gendered as to exclude more women than men. Why? Chest measurements and safety braces….

Many rides have a maximum chest measurement over which the safety braces won’t work. Now if you are a bloke you only have to worry about the absolutely measurement and squishiness of your chest. If you are a woman, however, it’s about the size, comfort and bruising potential of your breasts. And that’s not an easy thing to calculate…

The whole issue is gendered and yet that fact seems oddly overlooked…. as this article from icBirmingham proves:

Bosses at Alton Towers have introduced strict weight restrictions on four of their biggest attractions as a safety measure. And the theme park has revealed that the obesity crisis in Britain means it is considering a re-design of rollercoaster seats to accommodate the overweight. One special fat seat for larger passengers has already been installed on the £12 million Oblivion. But the 70mph ride bars those with a chest size of 52 inches or more – around 20 stone. Heavyweight passengers with similarly large chests have also been banned from the popular Nemesis and Ripsaw rides. And restrictions are even tighter on the £12 million roll-ercoaster Air. Anyone with a chest size of 50 inches or more – around18st- is banned from the 50mph ride. Embarrassingly, those suspected of being over the weight limit can even try out a seat before they join the queue for Air to see if they fit in. But the chest restrictions have been described as a crude estimation of weight by a leading Midland obesity expert. Dr Ian Campbell, chairman of the Nottingham-based National Obesity Forum, said that over-weight teens as well as adults could be discriminated against by the new policy.”

It is perfectly possible to be a healthy weight, female and have a chest size approaching 50 inches and the purported relationship between weight and chest size only works, really, for men. Women are built different and carry their weight in different places. Other blogs and question boards online have covered this issue before (see What Fat People Don’t Like as an example.

It reminds me, however, of how the physical world continues to take male (and abled bodied) as the basis for their decisions. Like this about replacement knees and this on doors This paper talks about the assumption of the male norm in design more generally and not to forget, of course, the Women’s Design Service who have talked about this and other similar issues for years. In fact WDS have just launched a new site, Gendersite to talk about the built environment and design and gender.