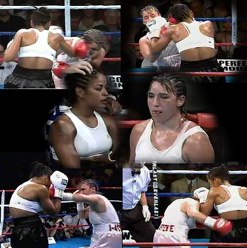 The Beijing Olympics may be over, but the fight is continuing to get women’s boxing included in the competition in London in 2012, reports Reuters, via Jezebel.

The International Boxing Association (AIBA) will press for the introduction of women’s boxing at the 2012 London Olympics, AIBA president Wu Ching-Kuo said on Monday.

“We will make a proposal and submit it to the International Olympic Committee,” Wu told reporters after a meeting of the AIBA’s executive committee in Beijing.

“Boxing is the only sport in the Olympic programme without women and we believe we are ready,” he added.

The AIBA was expecting a decision by December, said Joyce Bowen, who chairs the ruling body’s women’s commission.

Interesting side note, via the Reuters blog – women’s boxing featured in the 1904 Olympics.

Also check out this interesting history of women’s boxing. If this account is believed, it would be particularly apt for women’s boxing to make it into the 2012 London Olympics – almost three centuries after the first staged fights took place in this very city.