Banning prostitutes from hotels doesn’t seem such a great idea… 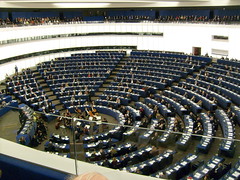 Leftwing MEPs are calling on the European Parliament to bypass hotels that enable prostitution, reports EUObserver.

This bit I agree with:

“The background for this decision is of course the growing understanding of the harm that prostitution causes for the people involved in prostitution as well as the role of prostitution in organised crime,” the Nordic MEPs said, noting the “praxis of many hotels as providers of sex trade with humans, as if they were dealing with an ordinary commodity.”

But if this photocaption is accurate, I cannot:

It may be that the reporting is not clear enough on this distinction, but it’s an important one. “Prostitute free hotels” – what does that even mean? That women suspected of being prostitutes will be barred from the door?

This, for example, is just wrong:

Hotels deny they would ever help a guest find a prostitute, while some smaller guest-houses exclude prostitutes who normally live with them in order not to put off EU clientele during the plenary sessions.

That’s not about protecting prostitutes, it’s about protecting our elected representatives from having to have day-to-day contact with women in the sex trade, because we couldn’t have that, could we?! It’s about the presence of prostitutes driving away business, not making sure that the hotel isn’t acting as a pimp.

Meanwhile, this too hit the wrong note for me:

“Not all men are clients,” Ms Collot added. “I hope there are still some faithful [European] deputies, for the sake of their wives.”

What’s with the implication that the bad thing about prostitution is that it involves men cheating on their partners?

Following on from Sokari’s post earlier today, I think this story a really good example of how it’s important for feminist critics of prostitution to be absolutely specific on what is and is not good policy, and be 100% clear on being anti-prostitution but pro-woman.

Photo of MEPs being entertained by an orchestra by inyucho, shared under a Creative Commons license