(Note: the image of this badge, below, comes from this amazing photo stream on Flickr. Really recommend checking it out, I had such a hard time choosing an image to use on this post!) 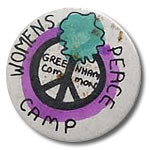 Londoners looking for a way to spend your Wednesday evening might want to head over to Housmans:

In 1982 headline news of 30,000 women encircling the US base at Greenham Common shook the nation out of its paralysed fear of nuclear war preparations. Soon a photo of women dancing on the weapons silos at dawn on New Years Day went round the world. Fear turned to action as, inspired and encouraged by the women camping there, ‘Greenham women’ began doing direct actions up and down the country. They changed the pattern of protest and their lives as well as the nuclear climate.

Kate Evans took part in some Greenham actions, witnessed others, and has written up her memories in dramatic, moving and often amusing narrative.

Frankie Armstrong is a singer with over 40 years in the folk, women’s and peace movement. From the early days of the Vietnam War, to the recent concert for Musicians Against Nuclear Arms, she has sung to raise spirits and awareness.

Rebecca Johnson was a Greenham camper and activist, and has worked in the anti-nuclear field for 25 years. She will relate Greenham to current feminist anti-nuclear activity.”

‘Thankyou Greenham’ is an honest, brave and funny account of how Greenham made Kate Evans aware of her potential and of her power to make positive change happen. I loved it.’ Bruce Kent

Image shared by Your Greenham, under a Creative Commons license